The mayor of Newark, New Jersey may have been a new face to Iowa Democrats attending their national convention in Charlotte, but nearly all came away newly enthralled with his speaking skills after he addressed the delegates this morning. 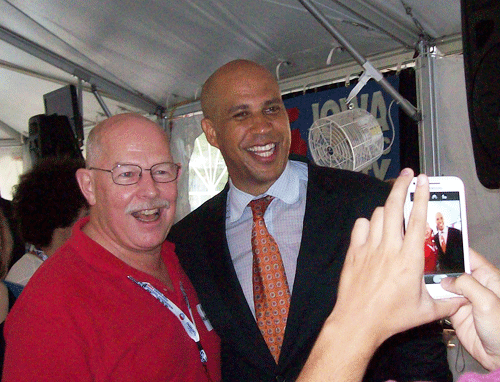 Newark Mayor Cory Booker opened with a declaration: “I want to be described as a son of New Jersey, but a grandson of Iowa because my grandmamma back in 1918 was born in Des Moines, Iowa.”

The crowd cheered as Booker talked of driving through the state on an RV vacation, attending family reunions in Iowa and how his grandmother’s siblings got their college educations in Iowa.

“My grandmother was born a Wilson. Her mother was a McDonald. Her father was a Wilson and if you look around — and I’m not just talking about the McDonald’s that serve the happy meal now — there are a lot of McDonalds and a lot of Wilsons still there,” Booker said, as the Iowans laughed at his joke. “I’m proud — proud of those roots.”

Booker had the Iowans laughing and clapping at his jokes, especially when he spoke of his reaction to the Republicans’ convention.

“I couldn’t sleep,” he joked. “I had nightmares I was being attacked by the empty chair.”

But soon women in the crowd were crying, especially when he closed by reciting a Langston Hughes Poem. Booker cautioned Iowans that President Obama’s chances for reelection hinge on their swing state.

“What’s exciting to me is just like my personal family history, it’s going to turn on the state of Iowa,” Booker said. “This is the state that brought my family from deep poverty to the middle class.”

This reaction from Delegate Peggy Whitworth of Cedar Rapids was typical of what the Iowans had to say in the moments after Booker’s speech: “That was great. He was amazing, really good. That energy is palpable.”

“Honestly, I love him,” Langston told reporters after Booker’s speech this morning. “…He’s a great storyteller and I think that really connects with people and we have to do more of that and so I just love Cory Booker. Count me as a fan.”

When asked if Booker might be a presidential candidate in 2016, Langston replied: “I’m willing to consider it.”

Booker did not stop to speak with reporters at the event, though, so Booker wasn’t asked if he’s considering a bid for the White House.