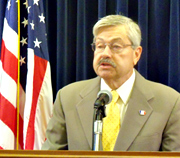 Iowa Governor Terry Branstad will be on hand to meet the Wisconsin Congressman. He talked about Ryan’s performance at last week’s Republican National Convention.

“Well first of all I thought he did a phenomenal job. I think he’s a very courageous guy,…he’s the only one I know of in the Congress that put together a comprehensive plan to address the biggest problem facing America,” Branstad says.

“And that is this massive increase in the national debt, which has gone up more than a trillion dollars a year, every year that Obama’s been president.”

Branstad says Ryan has an Iowa connection. “I was on the floor of the convention for his speech. He pointed out he comes from a very humble background, Janesville, Wisconsin, it’s not too far from Dubuque. His father graduated from Loras College, but his father died when he was 19. He’s a guy who has worked hard his whole life,” Branstad says.

Branstad was asked about the accuracy of statements Ryan made in his speech about the closing of a car plant in Janesville, Wisconsin.

“I think that he did a phenomenal job of pointing out that the Obama Administration promised to keep the unemployment rate below eight percent, but it’s not been below eight percent for 40 some months,” Branstad says. “And indeed we’ve spent all this money on this massive stimulus that hasn’t worked, but has saddled us with this massive debt that we’ve got to pay.”

The governor says he finds it “really interesting” that President Obama has been held accountable for the wrong information from his administration. “The projections that this administration have made on this budget have been so far off, and no one wants to talk about that. The truth of the matter is that people who have genuine knowledge and interest in the national economy have got to be scared to death…there seems to be just no interest from this administration in addressing the biggest problem facing America, and that is this massive debt.”

Branstad made his comments in his weekly meeting with reporters. He will be in Cedar Rapids later today to introduce Paul Ryan when he speaks late this afternoon. Ryan will be in Adel Wednesday morning for and event at the Dallas County Courthouse.