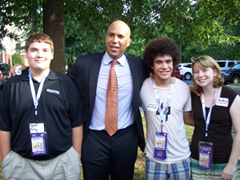 Two Iowans who’ll be voting for the first time have been asked to deliver the Iowa delegation’s votes today at the Democratic National Convention in Charlotte.

Iowa Democrats sent 68 delegates to their national convention and all 68 are going to vote for President Obama. Two college students from Iowa will make that announcement during the roll call of the states.

Antonio Montoya of Clive, a graduate of Valley High School in West Des Moines, will be a freshman at Grinnell College.

“I’m really excited to be representing my state at this national convention now that I’m 18 and can finally participate in this system that I’ve been observing since I was little,” Montoya said during an interview with Radio Iowa.

Montoya’s mother took him to his first precinct caucus in 2000.

“She was the precinct captain and she is terrible at math, so she had me learn how to do the caucus math equations,” Montoya said. “And so I was this little six-year-old and when it was time to break up in preference groups and do all the math, she said: ‘And now all eyes on the six-year-old.'”

Montoya, who plans to study physics, said several other adults stood over him that night, to make sure his calculations were correct.

Twenty-year-old Andrea Nemecek grew up in Cedar Rapids and she’s the other Iowan chosen to announce the roll call. Her father’s a retired high school government teacher.

“When I was a kid his idea of entertaining my sister and I was taking us to political rallies and not just Democrats, like Republicans, too,” Nemecek said during an interview with Radio Iowa. “So when I was growing up I got to see like a wide range of political candidates, you know, from candidates like Tom Vilsack and Tom Harkin to Elizabeth Dole and Chuck Grassley — like the whole spectrum, kind of.”

Nemecek’s first political involvement was five years ago, when she volunteered to work on Barack Obama’s Iowa campaign shortly after Obama visited her high school — Cedar Rapids Kennedy — in 2007.

“I’ve been involved with politics for so long, I don’t know if I can pinpoint like what exactly made me want to become a Democrat,” Nemecek said. “But I’d say I am a Democrat because I’m a young person. I’m a woman. I’m a college student and I’m from a middle class family…and I believe that Democrats stand behind, you know, every group, like every part of my identity.”

Montoya said “once upon a time” when he was little, he thought he might grow up to be a politician, but that’s not the case now.

“I’m more of a scientific type and I feel like if I were to go into politics my patience for a lot of things would run thin fairly quickly,” Montoya said, laughing. “I’m better suited to activism than being a political candidate, that’s for sure.”

Montoya’s counting on Iowa Democratic Party officials to hand him a script that he can read later today when the roll call is taken.

“I have a bit of a fear of public speaking,” Montoya said, with a laugh.

Nemecek gave an opening speech to the crowd of 1500 who gathered in a Cedar Rapids gym July 10th to see President Obama, although there’ll be a far larger audience for today’s roll call announcement.

“I’m really excited for it,” Nemecek said, “and honored.”

Nemecek is an English major at Grinnell College.