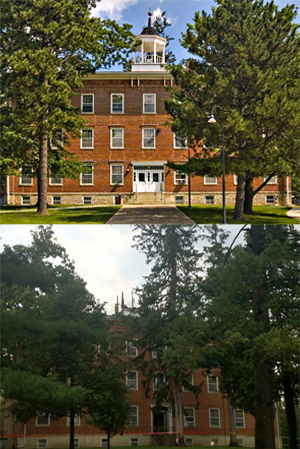 The top photo is the cuppola before the fire, the bottom photo is after the fire.

Lightning struck a 155-year-old building on the Cornell College campus in Mount Vernon early this morning.

A spokesman for the college, Jamie Kelly, says the lightning strike ignited a fire at College Hall at 3:30 a.m.

“It hit the cupola, the dome on top of the building. It destroyed the cupola and started a small fire. The fire was pretty much contained to the cupola and to the attic directly below it,” Kelly said.

A large, historic bell inside the cupola on top of the building was destroyed.

“It wasn’t the bell original to the building, but I believe it was a bell from the 1880s,” Kelly said. The bell, which was melted by the lightning strike, was typically only rung by the college a few times a year.

“It was used mostly for ceremonial occasions,” Kelly said. “We used it at commencement and we used it just last week when we had our new student convocation where we brought together all the new students on campus.”

This is the first week of the fall semester at Cornell, a private college with an enrollment of around 1,200 students.

Classes that were scheduled for today in College Hall are being moved elsewhere on campus. The building, built in 1857, houses both classrooms and offices. “My understanding is the building is okay,” Kelly said.

“It looks like no offices or classrooms were damaged. I’m not sure when classes will return to their location in there, but we’re hoping it’s going to be soon.” No one was injured as no one was inside the building at the time the lightning struck. Firefighters from Mount Vernon, Cedar Rapids, Lisbon, Marion and Springville responded to the scene.

Lightning also struck a tree in front of College Hall last spring. The brick building sits on top of a hill.