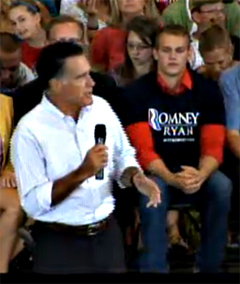 Romney began the noon-hour appearance by talking about the president’s acceptance speech last night at the Democratic National Convention. He said he didn’t watch the speech on TV, but did read it this morning.

“Perhaps like me you found it extraordinarily disappointing, surprisingly disappointing, because his speech four years ago, he laid out a whole series of lofty goals, and unfortunately, he was unable to meet them,” Romney said.

Romney went on to detail the promises he said the president made four years ago, but failed to keep.

“He said he’d raise incomes for people, in fact they’ve gone down by $5000 a family. He said he’d create more new business, people who wanted to start a new business would be encouraged to do so, in fact we are at a 30-year low in new start ups,” Romney says.

“He was going to get people back to work, you remember, with his stimulus plan? The stimulus said if we let them borrow $787 billion he would hold unemployment below eight percent. It’s been 43 straight months above eight percent.”

Romney also jumped on what he said was a “disappointing” jobs report that came out this morning.

“Ninety-five-thousand, I believe, net new jobs created and almost 400,000 people dropped out of the workforce altogether. It’s just simply unimaginable,” Romney said. “The president said that by this time we’d be at 5.4 percent unemployment. Instead we are at eight percent.”

Romney said if the president had followed through, everyone would have benefited.

“Had his policies worked as he thought they would, there would be nine million more Americans working,” according to Romney. 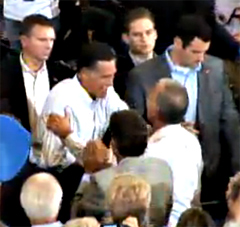 Mitt Romney talks to audience members after his speech at Northwestern College.

“If that had been the case, we’d have a lot better budget setting, we’d have a lot better family life in this country where people are struggling to make ends meet. We wouldn’t have many kids wondering whether when they get home at night if mom and dad will be there, because with two jobs trying to make ends meet they can’t be there We wouldn’t have as many seniors wondering if they are going to be able to put food on the table at the end of the week. We wouldn’t have as many young people wondering if they were going to be able to afford college next semester.”

Romney talked about his experience in creating jobs, using the creation of the Staples store chain as an example.

“This president tried, but he didn’t understand what it takes to make our economy work, I do. I’ll use that experience to get Americans back to work again,” Romney said.

“The president and his party are going to do everything in their power to convince you to vote for them. But I want you to ask this question: Who is dedicated to making sure we don’t pass on trillion dollars of debt to you? I am, my party is,” Romney said. “We are absolutely committed to making sure you can live the American dream. The other party will promise you lots of free stuff, but ask them how they are going to pay for that. And they’ll say, ‘oh we’re gonna borrow money from China to pay for that.’ Guess who’s going to pay the interest on that…guess who is going to pay it back all their lives. You are.”

Romney pointed out Governor Terry Branstad in the crowd and said he and Branstad won’t be around to pay off the $16 trillion national debt, but said the college generation now will if something isn’t done to cut the deficit now. It was Romney’s first stop in Iowa since becoming the Republican nominee at the party’s national convention last week in Tampa, Florida.