You are here: Home / Sports / The big game is almost here 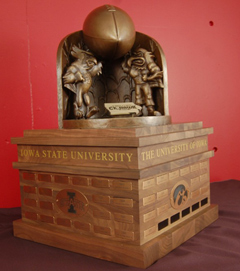 Iowa and Iowa State collide for the 60th time in Kinnick Stadium.

The Hawkeyes are hoping to major strides this week after narrowly escaping against Northern Illinois last week.

They also need to find a way to contain I.S.U. quarterback Steele Jantz, something they were unable to do last year in a triple overtime loss to the Cyclones in Ames.

Iowa coach Kirk Ferentz says containing Jantz is the job of the entire defense “and it’s easier said than done.”

He says someone always has contain responsibilities depending on the defense they are in. He says they learned the hard way what can happen last year when their containment broke down.

Ferentz says both teams will need to move on no matter what the outcome but there is something special about this week. “And none of us are oblivious to what’s going on here obviously, and I think it’s great for the entire state…it’s a big game for everybody,” Ferentz says.

Iowa State coach Paul Rhoads expects the Iowa defense will do a better job of keeping Jantz in the pocket.

Rhoads says Iowa has several advantages going in as they know how to win, they are a good team at home, and his team has not won in Iowa City since 2002.

The winning team will be awarded a brand new trophy, the fourth trophy the series has featured in a little more than a year. Rhoads says they are proud to be playing for something and it doesn’t matter what it is, “having it is the most important thing.”