You are here: Home / News / Vintage motorcycles to stop in Anamosa Monday 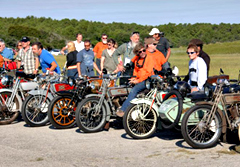 A coast-to-coast endurance run featuring vintage motorcycles will stop at the National Motorcycle Museum in Anamosa on Monday.

“This event ran first in 2010 and the rules then called for 1915 and earlier machines. Two years later it’s the second event and this time it’s pre-1930s. So 1929 and earlier machines made anywhere in the world are invited to participate,” Mederski says. This is a chance to view the 75 or so machines while they are running.

“It’s great to walk through and see them in a museum, but in this situation they are really out on the road, they’re dripping a little oil, they’re hot and they’re demonstrating what they are made for….it’s a very rare opportunity to see them in motion,” according the Mederski.

He says it’s free to see the vintage bikes. “They’ll arrive between 3 and 5 p.m. on Monday September 10th. We’re inviting people to come in and meet the riders and check out the motorcycles,” Mederski says. He says they will have covered about 1,000 miles from when they left Newburgh, New York to the time they reach the National Motorcycle Museum. The entire run is about 3,500 miles, ending in San Francisco, California.