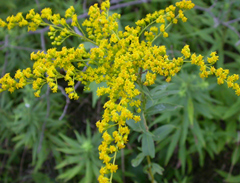 Hartzler says any time we don’t get rain for a while, it allows the pollen to be released in the atmosphere and it hangs around for a longer period of time. Ragweed is native to Iowa, but Hartzler says it traditionally hasn’t grown very well among row crops. He says those plants are now adapting to Iowa’s cornfields and they’re becoming more widespread. Hartzler says it may get worse in future years.

Relief for allergy sufferers isn’t likely until the first frost. He says there’s been enough rain for weeds to grow, but not enough to knock down the pollen. “Rainfall is excellent at washing (pollen) out of the air, it also saturates ragweed flowers so pollen can’t be released,” Hartzler says.

“Rain does help the weeds grow, but we’ve got enough moisture in most of the state to allow the weeds to do well.” He says the amount of pollen in the air has also been boosted by higher temperatures this year. “They’re higher earlier in the year because of the summer we’ve had,” Hartzler says. “The ragweed started growing earlier because of the warm temperatures in the spring. So we have high counts earlier this year than typical.”

It may be just the beginning. Hartzler says there’s evidence global warming may be promoting ragweed growth.