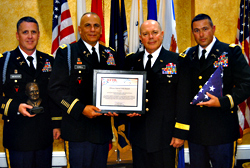 An Iowa National Guard Unit that served in Afghanistan was recently honored by the Department of Defense with the “Citizen Patriot Unit Award.”

“The award is given annually to the top individual and the top unit per the D.O.D.’s citizen patriot criteria. This particular unit, the Second Brigade Combat Team, had a year-long deployment in Afghanistan. The unit performed remarkably well, they had some very,very difficult missions,” Hapgood says.

Hapgood says the award not only recognized the soldiers, but was also based on the support they received from home while on deployment.