You are here: Home / Sports / Ferentz says QB Vandenberg shouldn’t try to solve everything on his own 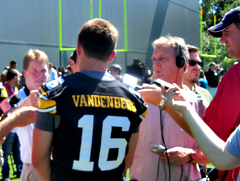 Iowa quarterback James Vandenberg was a popular interview at this year’s media day. The spotlight has grown with Iowa’s early offensive woes.

Vandenberg has connected on just over 54% of his passes in two games and the Hawks have only reached the endzone once in eight quarters.

“That’s the way he’s built and he’s so respected because of that. He’s extremely tough mentally, tough physically and he’s and excellent football player,” Ferentz says.

“Nobody’s happy about the performance we’ve had thus far…but all he can do is keep pushing keep working. The biggest thing he can do is not try to do to much, because that can affect his performance.”

Ferentz says Vandenberg cannot afford to let the struggles on offense to affect his decision making. “A big part of playing any position is you’ve got to just play within the framework of what it is you’re asked to do and trust that everybody else is going to do the same thing,” he says. 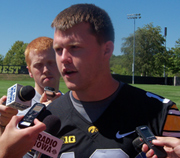 Ferentz says Hawkeyes need to resolved their redzone woes. They have settled for six field goals in the first two games. “At some point that is going to catch up to you and Saturday we came up short again,” Ferentz says.

He says things do get tougher as you get into the redzone and if you can’t master that you are going to have problems.

Ferentz says while eventually too many dropped passes will affect playing time he does not expect to make changes in the receiving corps this week.

He says you don’t want guys paralyzed for fear they will drop a ball and be pulled out, he says it’s a fine line they will have to work through. Ferentz says they made improvement in catching the ball through he spring, and the next step is for it to show up on the game film.

Ferentz says there are many FCS programs that can compete with teams from the bigger conferences and UNI is one of the best at doing it.

He says it was not surprise given U.N.I’s history of going into tough places and playing well, and he says the guys that were not on the team the last time they play, will have to understand that.

Ferentz says the won’t be taking this game lightly. U.N.I. nearly beat Iowa in Kinnick back in 2009 and two weeks ago nearly upset Wisconsin before losing 26-21. “If we ignore that, then we are fools,” Ferentz says. He says 2009 is ancient history to a lot of the guys on the team, but he says the Wisconsin game this year should get their attention.