You are here: Home / Crime / Courts / Man with international experience will lead Department of Public Safety

A former executive director of the International Criminal Police Organization (INTERPOL) has been named the new Commissioner of the Iowa Department of Public Safety.

Governor Branstad has selected Brian London to replace Larry Noble, who retired from the position earlier this year.

The 59-year-old London says he’ll make enforcement and efficiency top priorities, but isn’t planning any big changes when he begins his new job in Iowa on October 8.

“I did a lot of research before I applied for this position and the (Iowa Department of Public Safety) has a fine reputation nationwide, so anyone who thinks I’m going to come in there and make big, drastic changes – that is not the case,” London told Radio Iowa.

London’s long career in public safety started in the U.S. military in 1975.

He was also an officer in the California Highway Patrol, CIA, special agent in the U.S. Secret Service, director and supervisor of detectives at the U.S. Customs Service, executive director at (INTERPOL) and deputy chief for law enforcement at the Florida Department of Financial Services.

London says his experience with all of those organizations has taught him there are multiple solutions to any problem.

“I have learned a lot about the management problems of different organizations and what I think I bring to any organization is a departure from a one-size-fits-all type of solution,” London said.

London has most recently been working as an independent security consultant in Tallahassee, Florida. He and his wife have two grown children and a six-year-old girl. “My wife and daughter both love the cold and don’t like warm (weather),” London said. “I promised them, coming to Iowa, they’ll get a taste of cold.” 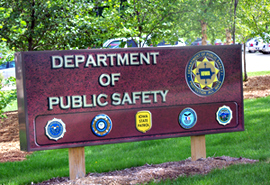 The Iowa Department of Public Safety has more than 900 employees, including over 600 sworn peace officers.

Governor Branstad released a statement about the hiring of London as DPS Commissioner:  “Iowa is incredibly fortunate to have Brian filling this critically important role within state government. There is no higher responsibility for the government than to protect its citizens, and Brian has a wealth of experience to apply within our Department of Public Safety.”