You are here: Home / Agriculture / Goats touted as option to herbicides for pesky weeds 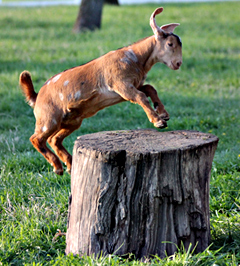 While many Iowa lawns are shot after this year’s long, hot drought, some of our properties are overgrown with weeds. Instead of using chemicals to get the jungle under control, there’s a greener solution: goats.

Goats can quickly strip down an overgrown hillside of vegetation. It’s called goat-scaping or eco-goats and central Iowa will be hosting a national goat show next month.

Forester Brian Know says there’s a growing demand for goats in Iowa as they’re eating machines and they don’t leave much behind. Know says whole herds can be rented out.

“It’s approximately 30 goats and we’ll put them on a half an acre and we can work through a half an acre in two or three days usually,” he says. Costs might be $2 per goat, per day. Better yet, goats can go places herbicides and mowers can’t easily reach.

“They prefer woody vegetation,” he says. “They will eat grass but they really prefer things like vines and rose bushes and poison ivy, things that give us problems.” For Iowans who are interested in eco-goats, the federal government has programs to help pay for fencing and watering facilities.

The National Goat Expo is scheduled for October 7th through the 11th at the Iowa State Fairgrounds in Des Moines.