You are here: Home / Agriculture / Branstad hopes “everything is O.K.” with Chinese leader 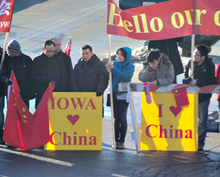 The Chinese leader who visited Iowa earlier this year hasn’t been seen in public since September 1 — and the host of his Iowa visit says it’s a puzzling development.

Xi Jinping is China’s vice president and he accepted Governor Terry Branstad’s invitation to visit Iowa this past February.

“Obviously we do a lot of trade with them,” Branstad said Wednesday, “and we’re really looking forward to his leadership, so we hope everything is O.K.”

Xi, who is 59 years old, has been expected to be named leader of China’s Community Party this fall and become China’s president in March. Governor Branstad first met Xi in 1985.

Xi was a local communist party official then and he visited Iowa with a delegation from Iowa’s sister state in China. About a year ago Branstad met Xi in China during a trade mission there.

“We have really thought, ‘What a neat situation that somebody whose first trip to America was to Iowa,'” Branstad said, “and he has such a fond feeling for the people in Iowa and the people he met here in Iowa.”

The Chinese government issued a statement Wednesday on behalf of Xi and other officials to express condolences to the family of a communist party official who died last week, but Xi has not been seen in public for 11 days.  Xi has canceled meetings with visiting foreign dignitaries this month and rumors are swirling in China about his health.