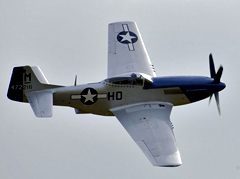 The annual “Fly Iowa” airshow is this weekend in southwest Iowa at the Atlantic Municipal Airport. Organizer Gary Pellett says there will be at least four warplanes from the World War Two-era, all P-51 Mustangs, including one owned and flown by Atlantic resident Mike Henningsen.

The Mustang’s engine puts out an impressive 1,500 horsepower, Pellett says, with a very distinctive sound.

He says the P-51s were “amazing machines” that will literally shake the ground when they’re warming up and taxiing for take-off. They were key airplanes in the American war effort and were the ones flown by the legendary Tuskegee Airmen.

The Mustangs aren’t the only high-powered, vintage aircraft that will be buzzing Atlantic this weekend. A bomber scheduled to make an appearance can produce 5,400 horsepower. Pellett says an A-26 “Invader” bomber will be flying in and some aerobatic flying will be performed by Greg Koontz, from Alabama, who is one of the top performers in the country.

There will also be static exhibits of other aircraft for people to enjoy, along with a tethered hot air balloon and helicopters rides, depending on the winds. Gary Maas (Moss), the “air boss” for the event, says the air show’s theme is “Heritage and Homecoming” as they’ve invited people from across the region to attend who have a career or experience in aviation.

Those people have written about their experiences and their bios will be on display and the individuals will be available for the public to meet. The event is Saturday, with a brunch starting at 8 A.M., an FAA Safety Team Pilot Safety Seminar starting at 8:30 and the air show beginning at 11 A.M.