You are here: Home / Fires/Accidents/Disasters / I-680 reconstruction project in running for $10,000 award 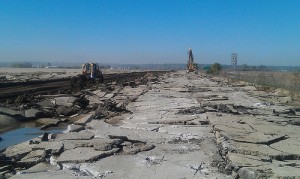 An interstate reconstruction project in western Iowa is among 10 finalists for a national award.

The Missouri River flooding in 2011 closed 77 miles of highways and interstates between Hamburg and Sioux City. The most highly traveled roadway section to close was a three mile stretch of Interstate 680 connecting Council Bluffs and Omaha, Nebraska. That section of roadway was destroyed after being under water for four months.

Troy Jerman, with the Iowa Department of Transportation, says I-680 reopened to traffic in early November after just over a month of construction. “They did that in 34 days, which was quite a feat, but everything just came together – the weather cooperated, the contractors were ready to go and the plan was there,” Jerman said. “It was quite a turnaround of a project.”

The I-680 project is up for a People’s Choice Award in the America’s Transportation Awards “ahead of schedule/small project” category. The winning project will be awarded a $10,000 prize. “We haven’t discussed what we would do with that (money) yet,” Jerman said. “The People’s Choice Award says it must be donated to a charity of our decision, but we haven’t had that discussion yet about where that would go.”

Iowans can cast their vote here. Voting is open now through October 19. The awards presentation is scheduled for November 16.