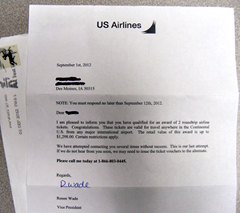 Thousands of Iowans are getting letters in the mail saying they’ve won two roundtrip airline tickets, but beware before you start packing your bags.

The letters may look like a traditional form letter from something called U.S. Airlines, or they may resemble two boarding passes.

Whichever one you may get, Geoff Greenwood at the Iowa Attorney General’s office, says the offer has several red flags that point to it being iffy.

“People are being notified that they were ‘selected,’ that they ‘qualified’ for an award,” Greenwood says.

“They didn’t enter anything and that’s gotta’ tell you something right there. They’re just picking your name out of a hat and suddenly giving you this free trip?” Greenwood says. “If you were to say ‘yes’ to this offer, chances are you’re going to have to go through some hoops and chances are you’re going to have to pay some money before you get these supposedly free airline tickets.”

If you call the 800-number on the letter, Greenwood says you may be subjected to a high-pressure presentation. “We’re in the early stages of looking into this,” Greenwood says. “We don’t have a lot of information yet because Iowans are just starting to let us know about this. We’ll be asking some questions of the company and making sure the company is following consumer laws if they’re trying to do business here in Iowa.”

While he’s not saying it’s a scam, Greenwood is saying to be very cautious.