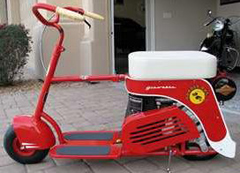 Doodlebugs have invaded a central Iowa town, but there’s no reason to call the exterminator.

It’s the 26th annual convention of people from across the U.S. who fix up and ride the Doodlebug brand of motor scooter.

They could go 25 miles an hour, all out. About 40,000 of the sturdy machines were manufactured in Webster City at the old Beam Manufacturing plant from 1946 to 1948. Ratcliff says there will be plenty of Doodlebugs buzzing around Webster City this weekend.

There’s an escorted tour to the airport and back, “an endurance run to see how many of them can make it,” he says. Visitors to the reunion come from as far away as New York and Alaska. Learn more at: www.wcdoodlebug.com