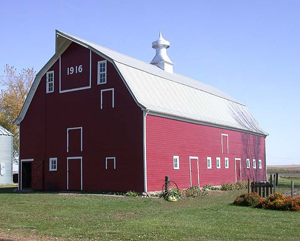 Iowans who appreciate historic barns can tour dozens of the big agricultural buildings during a special weekend-long barn tour later this month.

About a hundred barns are being featured statewide. Jacqueline Andre Schmeal, co-founder and president of the Iowa Barn Foundation, says each structure has a story and like the farmers who built them, they’re all different.

Some of Iowa’s oldest, well-preserved barns are in the Dubuque area and date back to the 1830s.

“The building was influenced by the ethnics where people came from, Germany, Luxembourg or wherever, or from Wisconsin or from Pennsylvania,” Schmeal says.

“In western Iowa, you tend to have more western cattle barns and they’re more alike. It would depend, too, on the crops they had to store or the animals they had to feed.”  Whether they’re painted the traditional red-and-white or are made of wood, stone or brick, Schmeal says barns can be beautiful and fascinating. 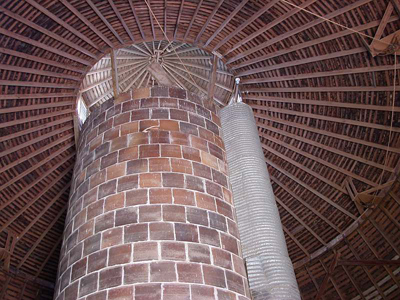 The Dobbin Barn in State Center.

She says one round barn in central Iowa that’s on the tour has an unusual story. “It was created by Van Pine Manufacturing in Davenport and all of the pieces were sent by railroad to State Center and then were hauled to the farm,” Schmeal says.

“It’s a huge, magnificent, round barn. You just go in there and you look at all those pieces and wonder how that happened.”

Most of the 100-some barns on this year’s tour have gotten preservation grants from the foundation. Schmeal says the organization has handed out more than $1.6-million since its founding in 1997.

Some Iowans have an undying devotion to saving and restoring barns and Schmeal says it’s well-deserved.

“It’s our heritage and it’s our history,” Schmeal says. “I cannot look at a barn without thinking of the farmer and the barn builder who worked all day and then he still had to put this barn together. Often, the family lived in the barn until the house was finished because they had to have the barn because that was their livelihood.”