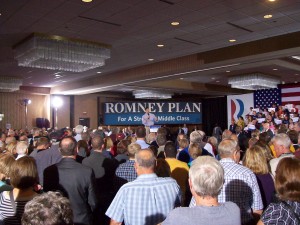 During a campaign stop this afternoon in Des Moines, Republican vice presidential nominee Paul Ryan touted “frugal” Midwestern values as the cure for what ails the federal government’s finances.

“You have the lowest average credit card debt in the nation. People in Iowa live within their means. You elect governors who balance the budget. You’re frugal,” Ryan said, to applause and cheers from the crowd. “We spent more money on net interest in our government today at the federal level than we do on education, transportation, agriculture and housing combined.”

Ryan, a congressman from Wisconsin, is chairman of the Budget Committee in the U.S. House of Representatives. Ryan touted his connections to Iowa and told a story about a relative who visited his great-grandmother-in-law from Clinton.

“And she brought her little dog…and she brought dog food…and she left a little bit of dog food in a bowl on the kitchen floor when she left and then she, about six months later, went to the airport to pick up her grandmother from Clinton, Iowa, for Christmas,” Ryan said. “And off the came she came off with a Ziploc bag full of dog food that she’d kept in the freezer that whole time…to save it — because she didn’t want it to go to waste. That is Iowa common sense. That is Iowa frugality,” Ryan said, to laughter and cheers from the crowd.

Midway through his speech Ryan made an appeal to Ron Paul Republicans who have deep reservations about the Federal Reserve system.

“The Federal Reserve is stepping in with yet another bail-out,” Ryan said and, as many in the crowd booed, one man yelled: “End The Fed!” Ryan continued: “All this money-printing, all this creation of money is sugar-high economics. What we want, what we deserve, what we need in this country is honest money.”

According to Ryan, “Wall Street” and the nation’s “big banks” are the main beneficiaries of the Federal Reserve’s monetary policy, but he said “the rest of us” aren’t helped by it. Ryan also told the crowd the country was in danger of economic calamity if President Obama is reelected.

“We have a very big decision to make and a handful of states will determine this,” Ryan said. “Iowans, just like Wisconsinites — we could very well be the states that determine how this all goes.”

Romney campaign staff said about 600 people came to listen to Ryan speak in a Des Moines hotel ballroom. The event was moved indoors due to the weather.

“Boy, we sure could have used this rain a couple of months ago,” Ryan said. “Man! You know it’s dry in Wisconsin, too.”

At just about the same time Ryan was speaking in Des Moines, Vice President Joe Biden addressed a rally at the Port of Burlington. Biden plans stops in Ottumwa and Grinnell on Tuesday.