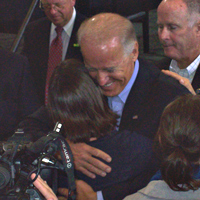 Vice President Joe Biden spoke late this morning in Ottumwa, suggesting Republican rivals Mitt Romney and Paul Ryan “are not on the level” with voters a variety of issues like Medicare, the national debt, trade and taxes.

“I found it stunning in what was otherwise a really good speech that Governor Romney made accepting his nomination that he said, emphatically, as president he would take a jobs tour,” Biden said. “Well, folks, based on his record, it’s going to have to be a foreign trip.”

Biden suggested the rhetoric from Romney and Ryan doesn’t match their plans for the country.

“Folks, we’ve seen this movie before,” Biden said. “Massive tax cuts for the wealthy, shed reasonable regulations on Wall Street and the big banks, let the insurance companies go back to making decisions about pre-existing conditions, life-time limits and the rest about your health insurance — we know how that movie ends…It ends in a catastrophe for the middle class.”

As he did the day before in Burlington, Biden touted the Obama Administration’s record on trade issues. According to Biden, the U.S. has filed more trade cases against China in the last four years than Republican George W. Bush’s administration did in its eight years.

“The fact is there’s nothing I can see that Romney has said or done or is proposing where he would stand up to unfair trade practices or eliminate incentives for American corporations to leave Iowa and go somewhere else,” Biden said.

Biden told the crowd he and President Obama favor restoring the economy the “old-fashioned way” by focusing on policies that benefit the middle class.

Biden spoke for nearly half an hour, then shook hands and posed for pictures with the crowd for another 20 minutes. A reporter asked Biden about a remark Romney made at a fundraiser, suggesting his job as the GOP nominee was “not to worry” about the “47 percent” of Americans who will vote for Obama because they’re “dependent on government” and “believe they’re victims.” Biden merely said he would “let the words speak for themselves.”

Shawn McCoy, a spokesman for Romney’s campaign, issued a written statement in response to Biden’s remarks.

“President Obama and Vice President Biden have proposed failed policies that have led to more and more government, and greater and greater debt,” McCoy said. “Mitt Romney’s plan for a stronger middle class will create 12 million new jobs and move Americans off of government dependency and into greater prosperity.”