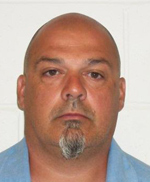 A prison inmate who escaped from a work detail in southeast Iowa earlier this week has been captured in southern Missouri.

Department of Corrections spokesperson Lettie Prell says Steven Adcock was working in the Keokuk cemetery with other inmates late Monday morning when he escaped in a truck at the cemetery.

A short time later, authorities learned Adcock stopped for gas just across the Iowa border with Missouri. “A citizen sold him 20 dollars in gas from their residence and then later saw that (Adcock) was wanted,” Prell said.

The 42-year-old Adcock remained on the loose until this morning when he was captured in Bloomfield, Missouri. “He was in another car…a stolen vehicle from Kansas City, Missouri,” Prell said. “Law enforcement arrested him following a short pursuit and there were no injuries.”

Adcock started serving a 16-year prison sentence in January 2011 for third-degree burglary convictions in Johnson, Clayton and Muscatine Counties and theft, eluding and drug possession convictions in Polk County. He was being held at the John Bennett Unit, a minimum security facility that’s part of the Iowa State Penitentiary complex in Fort Madison.

Prell said Adcock was part of a 10-inmate work detail crew with two supervisors. “Any changes that may ensure greater security or adequate response to the particulars of this incident will be considered and implemented,” Prell said.

Adcock is currently being held in the Stoddard County Jail in Bloomfield, Missouri and will appear in court Thursday for extradition proceedings.