You are here: Home / Sports / Injured Iowa runningbacks questionable for this week 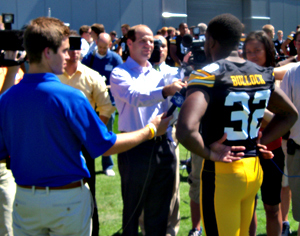 Iowa coach Kirk Ferentz says the Hawkeyes are preparing to play without running backs Damon Bullock and Greg Garmon when they host Central Michigan on Saturday.

Bullock suffered a head injury and Garmon injured his arm in Iowa’s victory over UNI. Ferentz doubts Bullock will play.

“Greg Garmon, we’ll see, he’s probably got a better chance than Damon does, and we’ll see how the next couple days go before we make any judgments on that…otherwise I think we are in pretty good shape healthwise, and that’s a positive,” Ferentz says.

Ferentz says Bullock has made big strides in the early portion of the season as he was a young player coming into the season and by this third ballgame was playing more decisively and confident until he got knocked out of the game.

Ferentz says it is likely Jordan Canzeri will return to action this season. Canzeri suffered a torn ACL during spring practice. “It’s just those things are hard to predict and everybody is different,” he says. He says it’s a matter of how Canzeri feels.

Freshman Michael Malloy could see time at running back this week. Malloy missed the UNI game due to an illness. Ferentz says Keenan Davis and Kevonte Martin-Manly played well against the Panthers but the Hawks still need a third receiver to emerge. He says there is a help wanted sign up for that third receiver.