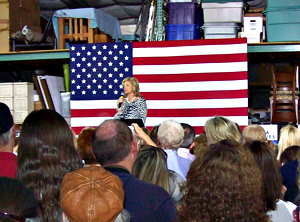 Ann Romney says fellow Republicans who’ve criticized her husband need to “stop it” and realize “how lucky” the party is to have Mitt Romney as its nominee.

Ann Romney spoke late this afternoon to about 200 people, mostly women, who’d gathered for a rally in the store room of a central Iowa furniture business.

“Wow, back in Iowa. Here we are again,” Romney said, to cheers and applause. “However, I don’t want it to be a 10-vote margin again. I want to have a bigger win, so let’s make sure in Iowa we win big in November.”

That’s a reference to the photo-finish on the night of the Iowa Caucuses, when Mitt Romney was declared the victor over Rick Santorum by just 10 votes. Later, a certification process recorded Santorum the winner, by 34 votes, but seven precincts did not submit their certified results.

During her remarks to the crowd this afternoon, Mrs. Romney said it is “really hard for me as a wife” to watch the campaign unfold. Former Reagan speechwriter Peggy Noonan recently wrote that it’s “time for an intervention” in the Romney campaign. William Kristol, a conservative who is the editor of The Weekly Standard magazine, used the words “arrogant and stupid” to describe Romney’s comments about the “47 percent” of Americans who won’t vote for him.

During an interview early this evening with Radio Iowa, Mrs. Romney directly addressed her fellow Republicans who’ve criticized her husband.

“Stop it. This is hard. You want to try it? Get in the ring,” she said. “This is hard and, you know, it’s an important thing that we’re doing right now and it’s an important election and it is time for all Americans to realize how significant this election is and how lucky we are to have someone with Mitt’s qualifications and experience and know-how to be able to have the opportunity to run this country.”

The criticism and very public hand wringing from Republicans comes as national polls show the race between Romney and President Obama is essentially tied.

“It’s nonsense and the chattering class…you hear it and then you just let it go right by,” she told Radio Iowa. “…Honestly, at this point, I’m not surprised by anything.”

Romney said her role is to be supportive rather than to give her husband advice about the campaign.

“We call the rope line now the advice line,” she said, laughing, “…because everyone cares and everyone wants to help and everyone wants to just give their peace — a little piece of advice — so I feel like my best advice is just to bring peace and calm to him and just trust in him and just say, ‘I know you can do it,’ but not to give him any advice because it gets too overwhelming.”

With the race so tight, the three October debates between Romney and Obama may prove crucial.

“In all the past debates, he would find me in the audience and after each question, he’d look at me ’cause it was like, ‘Did I do O.K. Ann? Was that O.K.?'” she said. “And I love that because he cares so much. I mean, we have such a good relationship and we have such a strong marriage and I know that he measures himself and how he’s doing by my face and how I think he’s doing, so I know in these next debates it’s going to be very important for me to be sitting in that audience.”

During her 10 minute speech to the crowd, Ann Romney said she was here in Iowa to talk about “the good side” of her husband that “very few people know about.”

“The real measure of a person is not how much money we make, but how we live our lives,” she said.

This was Ann Romney’s first solo visit to Iowa this year and it came in the same week Vice President Joe Biden and GOP vice presidential nominee Paul Ryan campaigned in the state.

“In Iowa, you all can make the biggest difference in the world,” she said. “If we carry Iowa, we have so much better of a chance of winning this presidency.”

AUDIO of Romney’s speech at By Design in Clive, Iowa.

Two polls of likely Iowa voters have been released today. One showed Romney ahead, the other showed Obama in the lead.