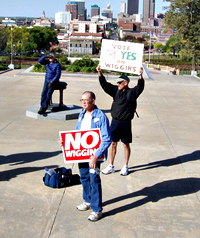 A rolling debate about one of the justices on the Iowa Supreme Court started this morning  in Des Moines and it’s destined to spread through 17 cities and cover 1,300 miles this week.

One group is campaigning against Justice David Wiggins. He’s one of the seven justices who joined the court’s 2009 ruling which paved the way for same-sex marriage in Iowa. Tamara Scott is co-chair of Iowans for Freedom and she’s riding around the state on the “No Wiggins” bus this week. 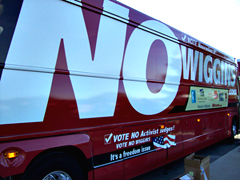 “This is not personal. Understand he’s just simply number four in a line of seven that committed a grievance against the people,” Scott said at the Des Moines stop. “…Now you have the chance to vote Justice Wiggins, number four, out for his deed and his part in this crime against the people and the constitution.”

The Iowa State Bar Association is trailing Scott’s group, asking Iowans to vote in favor of Wiggins retention this November.

Christine Branstad, an attorney from Des Moines who is Governor Branstad’s niece, urged Iowans to vote yes on Wiggins.

“Iowans need to recognize what we have in our extraordinary judiciary and protect it,” she said, “And we’re here to provide facts and to fight the misinformation.” 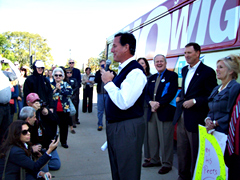 During his remarks this morning, Iowans for Freedom chairman Bob Vander Plaats pointed to the 63% rating Wiggins got from his fellow lawyers.

“What they said in that scoring instrument is Judge Wiggins is arrogant. He’s confrontational. He’s not all that bright and, above all, he’s lazy,” Vander Plaats said.

“Ladies and gentleman, take the (same-sex marriage ruling) out of there, he does not deserve to be on the bench and we need to vote Wiggins out on November 6.”

Guy Cook, a Des Moines attorney who is president-elect of the Iowa State Bar Association, shot back about half an hour later, saying a score of 63 percent shows Wiggins has an “overwhelming majority” of support from his peers.

“That’s a vote of confidence that, if he was a politician, would be a landslide and if you look at comparatively to politicians, which he’s not, congress is at 12,” Cook said, getting laughter from other lawyers standing nearby. “President Obama is somewhere around 46-47 percent. Governor Branstad is somewhere in the low 50s. Justice Wiggins is at 63 percent.”

Former Pennsylvania Senator Rick Santorum, the winner of the 2012 Iowa Caucuses, has joined the “No Wiggins” bus tour today for the stops in Des Moines, Pella and Ottumwa..

“I didn’t come here for any reason other than to encourage the people of Iowa to do what you do so well — that I am a witness of — and that is speak loudly to the country,” Santorum said.

Dan Moore, a Sioux City attorney, called Wiggins a “well-respected” justice who followed the constitution on a controversial case. 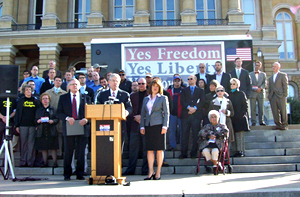 “The court did not redefine marriage, nor impose same-sex marriage on anyone,” Moore said. “The truth of the matter is it merely imposed the constitutional clause of equal protection.”

A man holding a “No Wiggins” poster periodically shouted out while Moore and other attorneys were speaking, saying: “Sodomy is against the law.”

Another man stood nearby in silent protest, unveiling a poster that read “Bigots for Jesus” on one side and “Vote Yes for Wiggins” on the other.