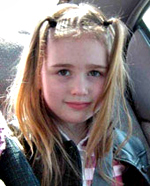 Update 2 p.m.: The former boyfriend of Evelyn Miller’s mother, 33-year-old Casey Fredricksen, has been charged with the girl’s murder.  More details to follow.

Authorities have scheduled a news conference for this afternoon in northeast Iowa to release what they call a “significant development” in the investigation of a seven year old homicide investigation.

Five-year-old Evelyn Miller disappeared from her mother’s apartment near the town of Floyd on July 1, 2005.

Her body was found five days later along the Cedar River in Charles City, about two miles away from her home. No one has ever been arrested in her death.

“One analogy you can use is a spider doesn’t weave a web in a day. It takes a while and we have to do this web, in a sense, to get these charges filed and get this person into trial,” Lynch said in July 2011.

He’s among the people who are scheduled to address the media at the Floyd Community Center at 1:30 p.m. Evelyn Miller’s grandparents will also be in attendance. Since Evelyn’s death, her mother Noel moved to California.