You are here: Home / News / Lottery has an outbreak of winning tickets 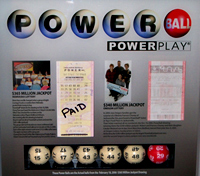 A display at Iowa Lottery Headquarters in Des Moines chronicles past winners of the Powerball jackpot.

Check your numbers, as your net worth may’ve jumped overnight by several digits. A Powerball ticket sold in Bondurant won the jackpot in last night’s drawing worth $202-million.

But that’s not all, according to the Iowa Lottery’s Mary Neubauer, who says it may have been the “winningest” night in Iowa lottery history.

“There were four big prize winners last night here in Iowa including both Powerball and Iowa’s $100,000 Cash Game,” Neubauer says. In addition to the $202-million dollar Powerball jackpot, there were also one-million-dollar and $10,000 winners in the Powerball last night.

Plus, there was a grand prize winner in Iowa’s Hundred-Thousand Dollar Cash Game. Neubauer can’t say yet where any of the winning tickets were sold. “This was such an unusual evening, we need to sort through all of these details,” she says.

“Lottery security was working on it last night and is already working on it this morning. It certainly does not appear that there was anything amiss but we just need to review all of these details and we hope to have that information ready to release later this morning.” Neubauer says it’s the second time this year a Powerball ticket sold in Iowa has won the monster jackpot.

This $202-million winner is Iowa’s second-largest jackpot winner, right behind the $241-million “Shipping 20” prize claimed in June by a group of Quaker Oats factory workers in Cedar Rapids. Neubauer says September 26th of 2012 may go down in Iowa Lottery history.

“We think this may have been Iowa lottery players’ winningest night ever, or luckiest night or whatever you want to call it,” she says. “We can’t remember a time when we ever had this many big winners all in one night. It certainly is unusual news.”