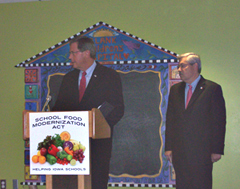 Republican Congressman Tom Latham is sponsoring a bill that would help American schools upgrade the kitchens where school lunches are prepared.

Latham also wants those who prepare school lunches to get more training.

“If there’s any cost to this at all for the school districts it will be made up with efficiencies and also not having food wasted,” Latham says, “because you’re going to have the kids actually wanting to eat the food that’s presented in a very appetizing way.”

“I’ve looked in our school cafeteria and the equipment that we have is 28, 30 years old,” Stark said. “And the deep fat fryers are there and all of that.”

“One of the things that the congressman’s legislation is designed to do is to make sure that we’re preparing food that’s not only good and healthy and nutritious, but that is attractive and appealing to young people,” Branstad said.

One out of three American kids are overweight or obese.

“Ensuring that school meals are as healthy as possible is especially important since most of the calories that kids consume outside the home are consumed at school,” Latham said. “And I’m proud to say that we’re trying to doing something in congress to try to improve school meals.”

Latham said new USDA school lunch guidelines which went into effect this school year are a “work in progress.”

“The School Lunch Program originally came into being back before World War II because they couldn’t get enough healthy people to go into the military. They would lose about a third of them because they were deficient in nutrients…What we’re seeing now is it’s about the same percentage of people who can’t get into the military because they’re obese or overweight,” Latham said. “We’ve got to address this problem.”

Other Republicans in congress have been more critical of changes in school lunch menus, questioning whether 850 calorie lunches are adequate for teenagers, denouncing new portion sizes and the shift to serving more fruits and vegetables. Latham’s staff invited registered dietician Teresa Nece to speak at this morning’s news conference, and she defended the new school lunch standards.

“One of the things to keep in mind is that the new meal standards were based on recommendations from the Institute of Medicine, so these are not something that came out that didn’t have a scientific background,” Nece said.

Nece teaches a class in food service management at Iowa State University. She’s a member of the Iowa Academy of Nutrition and Dietetics.

(This story was updated on Tuesday, October 2 to reflect new information from Latham’s staff on the bill’s contents.)