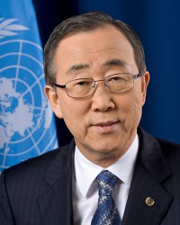 The secretary-general of the United Nations will be paying a visit to Iowa next month. World Food Prize president Kenneth Quinn says Ban Ki-moon will address the World Food Prize laureate award ceremony on October 18 at the State Capitol.

“This is at the very top…to have the secretary-general of the United Nations come and speak here,” Quinn said. Former U.N. Secretary-General Kofi Annan spoke at the World Food Prize in 2010.

Microsoft founder Bill Gates delivered an address at the event in 2009.

“Now, to have (Ban) coming here and bringing a delegation of very senior United Nations leaders with him…we’re just thrilled,” Quinn said. The Des Moines based World Food Prize, launched in 1986, is often referred to as the Nobel Prize of agriculture. This year, the award is going to Daniel Hillel, a scientist who is credited with the development of “micro-irrigation” — bringing more efficient water usage to crops in some of the driest regions on the planet.

Quinn believes Hillel’s work may’ve been a factor in drawing Ban to the event.”The laureate this year, an Israeli who has done work in Arab countries and Palestinian communities, certainly reflects the kind of approach that the U.N. and the secretary-general have advocated in terms of development and promoting peace,” Quinn said.

Over 1,500 participants from more than 70 countries are expected to take part in the week-long World Food Prize events October 16-20.