You are here: Home / Sports / Cyclones lose a chance for conference win with poor offensive effort 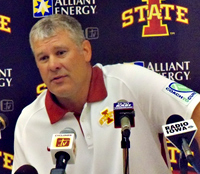 Iowa State failed to take advantage of a stellar defensive effort and fell Saturday evening to Texas Tech in Ames 24-13.

It was the Big 12 season opener and a chance for they Cyclones to go 4-0 overall.

The defense opened the scoring with an 87-yard interception return for a touchdown by senior linebacker A.J. Klein, but the offense committed four turnovers and failed to take advantage of good field position throughout the rest of the game, which was disappointing for coach Paul Rhoads

“More games are lost than are won, and we showed that tonight. Two fantastic defensive efforts by our kids and the Texas Tech defense, a lot of credit to them” Rhoads said.

“To win in the Big (12) you’ve got to persevere, you’ve got to be prepared to play all 60 minutes, a lot of credit to them, they got that done better than we did tonight.” Cyclone quarterback Steele Jantz threw an interception and fumbled the ball at keys times that killed I.S.U.’s momentum and put the defense quickly back on the field without much rest.

Rhoads said in his post-game meeting with the media that he would not think about a quarterback change until analyzing the game tape. “Steele Jantz is not the one to blame for this single loss. Obviously Steele Jantz contributed to it, but we don’t need to jump on that wagon right now and start beating him,” Rhoads said. Rhoads says he kept Jantz in the game after some mistakes because he felt Jantz could get the job done.

“They guy’s got talent, he’s used poor judgment too much and he’s made certainly a number of negative plays that have hurt our football team. He’s got to improve. Does that mean we’ll challenge him to see who practices better? Probably so. As I’ve always said you’ve to keep competing on any position, and quarterback’s no different,” Rhoads said.

The offense generated just 73 yards passing and 116 rushing.  The Cyclones also missed an extra point after scoring a go ahead touchdown in the 3rd quarter.

Jantz was not made available to the media after the game. Tight end Ernst Brun talked about the lack of offensive output.

“I guess we were getting different looks that we saw on film, they changed their defense up a lot, they didn’t play as much zone as we thought, they played a lot of man. So, I think we were a little shocked,” Brun said. He says it was hard to get the ball with good field position and then not be able to get any points.

Senior linebacker Jake Knott said the defensive effort wasn’t perfect. “They ran some plays they hadn’t showed on film every single game last year, so they came in with a lot of new stuff. I think the defense played okay, in certain situations we played fine, but we didn’t get that big play at the end to really help the offense out there,” Knott said. The senior leader refused to be critical of the offense for turnovers after the defense made stops to get the ball back.

“Well, that’s football and there’s nothing you can really do about that, you look at it as a defense and the team is a family and if one side isn’t doing as well or vice-versa, you’ve got to pick each other up. Once again, I think we did that for part of the game, but we could have finished a little bit stronger, definitely,” Knott said. Knott admits it was a key opportunity that they couldn’t capitalize on.

“Well, I think it was definitely a chance for us to gain that respect and national recognition that we have been fighting for for so long, and Texas Tech just came out there and just outplayed us. And we’re gonna have to come back next week and get ready for TCU,” Rhoads said. The Cyclones take their 3-1 record on the road to TCU on Saturday.