You are here: Home / News / Ryan highlights Iowa roots as he tours the state 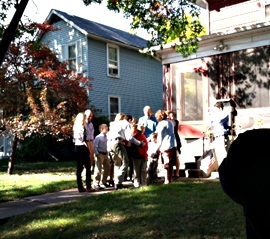 Paul Ryan and his family visit the home in Clinton where his grandmother-in-law once lived.

GOP vice presidential nominee Paul Ryan is a congressman from a neighboring state and his hometown is Janesville, Wisconsin — not far from the first bus tour stop Monday night in Dubuque.

“I live two hours east of here,” Ryan said in the Loras College Fieldhouse Monday night. “…We wanted to start here at Loras because this is where my grandfather went to college.”

Ryan’s grandfather took classes at what was then called Columbia College nearly a century ago, graduating in 1919. Ryan began his Tuesday in Clinton, where his wife Janna has family roots.

“This is a great homecoming. I brought not only my own family, but we brought some of our extended family as well. We brought Janna’s sister, Dana; Janna’s sister, Molly; her uncle, Paul Petersen, who grew up here,” Ryan said.

“Janna’s mom was born and raised here in Clinton. (Her name was) Prudence. Janna’s grandmother, Adelaide Petersen, lived here most of her adult life. She grew up in New Hampton.”

The campaign bus pulled up in front of a house in Clinton today and unloaded all those relatives. It’s the home where Ryan’s grand-mother-in-law, Adelaide Petersen, lived until 2004. Her husband had been a doctor in Clinton. Their daughter — who was Ryan’s mother-in-law, grew up in the house. Janna Ryan’s mother married and became a prominent lawyer in the state of Oklahoma. Ryan’s mother-in-law died of cancer in 2010.

Family reminiscing has been a fixture of this trip, with Ryan inviting cousin Allen Borlaug of Protivin, Iowa — a former state senator — to ride in the bus today, too. Borlaug and Ryan have a rather famous cousin — Iowa native and Nobel Prize winner Norman Borlaug.

“That has always been bragging right in our family,” Ryan said this morning in Clinton. “That is one man who we have always been so proud about.”

Ryan’s three children have been along for the journey through eastern Iowa, too. The kids and the rest of relatives on the campaign bus gathered on the sidewalk of the former Petersen family home in Clinton this morning. A stone in the front yard is painted with the name of the family that currently lives in the house, but a Romney-Ryan campaign sign is planted in the lawn.