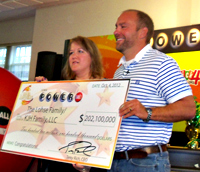 A couple from the Des Moines suburb of Bondurant turned in a $202-million winning Powerball ticket from the drawing on September 26th at Iowa Lottery Headquarters in Des Moines today.

They chose to take a lump sum payment of $129.8 million, the second largest lottery jackpot ever won in Iowa. Forty-two-year-old Mary Lohse said she first thought she had a winning ticket as she saw a story about the ticket be sold in Bondurant on the TV the next day as she left to take the kids to school.

“I thought okay I’ve got to remember to look when I get to work and I did and I had the last three numbers and was like well crap I think I won at least a hundred bucks, I don’t know how it works. And then I called the number on the ticker and they all matched,” Lohse explains. Rich then asked,”Did you say oh crap again?” And Lohse replied, “Yes I did.”

She then called her husband Brian, a lawyer for EMC who was at a conference out of town. “I didn’t believe her, I didn’t believe her boss and told her if she is telling the truth to head straight to our attorney’s office,” Lohse said. 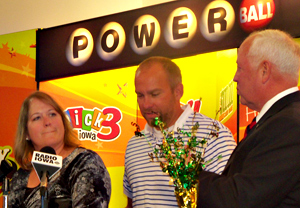 “And she texted me a couple of times — to keep up the charade I thought — asking directions.”

He eventually believed the story and decided to leave the conference and come home early. The couple have three daughters, and he said he had some advice for them about the family’s windfall.

“Basically, one they are going to get a lot more dates, which is important to the 15-year-old. But, just stay grounded and don’t change the way we’ve raised them, they are still the same person and we want to instill the same values, but obviously things are going to change,” Lohse said.

Mary Lohse is a medical assistant at a pediatric clinic in Des Moines. Both are now on a leave of absence and said they are trying to determine if they will continue working. One thing they have decided is to give some money to their favorite charities.

“Obviously our church is a big thing for us, and we want to help our church in whatever way we can, I think we are going to establish a charitable foundation. So that will be one of our first priorities through that foundation,” Brian Lohse explained. “And then certainly our school district, helping them out in Bondurant-Farrar, and then beyond that, we are both are very involved in various charities. Cancer related charities are what we do quite often.”

The Lohse’s jackpot was one of four big prizes won in Iowa in that September 26th drawing. There was a one-million dollar prize, a $10,000 prize were won in Powerball and there was a $100,000 prize won in another game.

The jackpot is the second largest won in the state behind the $241-million won by 20 Quaker Oats employees in Cedar Rapids in June.