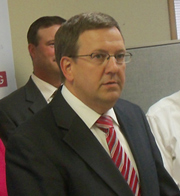 House Speaker Kraig Paulsen, a Republican from Hiawatha, says the ultimate goal is trying to ensure every student has a “great” teacher, but that doesn’t mean a shift to an entirely “merit-based” pay system.

“There is a fair amount of conversation in a carrot approach,” he says, “where if a teacher would be exceptional or, for example, if they get their national board certification, that we would incent those types of behaviors by adding to their salary.”

Part of the “Iowa Strong” agenda Republicans have laid out since this summer calls for protecting the “integrity” of elections by requiring a photo I.D. for voting.

“In the proposal that we have put forward in the past, for those that don’t have IDs, we have also provided a mechanism whereby they can get a free one,” Paulsen says. “It should not be too high a burden and I also think it’s something that Iowans uniformly support.”

Paulsen and other Republican leaders from the statehouse held a news conference earlier today in Cedar Rapids to discuss these and other issues. Last week in Council Bluffs the group pledged that if Republicans win the House and Senate this fall, they’ll push next year to end public funding of abortions. Under current rules, state taxdollars via the Medicaid program pay for abortions in cases of rape, incest or to save the life of the mother.