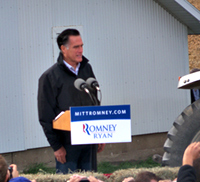 Mitt Romney speaking on a farm near Van Meter.

Some 1,200 people parked in the terraces of a harvested cornfield and then listened to Romney in front of a white barn flanked by tractors and a combine with the “R” symbol of Romney’s campaign on the side.

“These are tough times, with real serious issues, so you have to scratch your head when the president spends the last week talking about saving Big Bird,” Romney said, and the crowd laughed and cheered.

Romney has said he’ll cut taxpayer support of PBS, home to the children’s program “Sesame Street” and its main character, Big Bird, as part of a push to reign in federal spending.

A handful of Iowa Citizens for Community Improvement members wearing the costumes of Sesame Street characters stood on the gravel road near the farm where Romney spoke today, holding protest signs. President Obama’s campaign has produced an ad, saying “Romney knows it’s not Wall Street you have to worry about — it’s Sesame Street.”

The Republican National Committee has released what it calls “The Count” — a reference to another popular Sesame Street puppet — saying Obama’s talked about Sesame Street at least 13 times since his debate with Romney, but hasn’t said the word “Libya” once in public.

Romney quickly shifted his focus to agriculture after the Big Bird reference.

Combine sporting a Romney logo during his appearance in Van Meter.

“I actually think we need to have a president who talks about saving the American people and saving good jobs and saving our future,” Romney said to more cheers.

“And also saving the family farm, I come to this place recognizing that not every John Deere harvester has an R on it like that, but I appreciate that. I come today to talk about what is happening in the agriculture community and what we can do to do a better job, because this is another area where the president and I have very different points of view.”

Romney said the president wants to raise the tax rate from 35 to 40%.

“And that won’t be good for farms. My own view is I want to tax that tax down, I want to take it from 35-percent to 28-percent and help American farmers and small business,” according to Romney.

“And you know he has a plan for the death tax, he’s planning on raising the death tax pretty significantly. My own view is we should kill the death tax. You’ve paid for that farm once, you shouldn’t have to pay for it again.”

Romney also said he wants to reduce regulations on farmers, as he says they’ve gone too far.

“The government tried to get into regulating rain water in ditches on farms. It used to be that there was rainwater in Iowa and people cared about that, we hope it’s coming back soon,” Romney said in reference to the drought. “But in addition they of course want to regulate dust, they want to impose duplicate rules on pesticides. There was actually an effort — you recall this — to prevent teenagers from being able to work in certain functions on farms, and then there’s pushing cap and trade.”

He said “Cap and Trade” would cut back major new markets for farmers. Romney wrapped up his agriculture-related remarks by talking about the failure of Congress to pass a farm bill.

“The president has to exert the kind of presidential leadership it takes to get the House and the Senate together and actually pass a farm bill. That’s something I will devote my time to, to make sure that bill gets passed so farmers know what to expect,” Romney said.

“There are big differences between the president and me. He has no plan for rural America, no plan agriculture, no plan for getting people back to work, and I do. You know I’ve spoken about it all over the country. And I’m going to make sure I help the American farmer and I help our economy, and I get America working again.”

Romney wrapped up his speech with some personal recollections of people he had met on the campaign trail, including a former Navy Seal who was killed in the attack on the U.S. embassy in Libya. The speech was a quick 15 minutes on the cold blustery day that saw the sun obscured by clouds during most of the time supporters waited and then listened.

In response to the Romney rally, the Obama campaign said it has sent a letter to farm groups about the drought and charged that Mitt Romney’s running mate, Congressman Paul Ryan, is leading the House blockage of a bipartisan farm bill.

The release went on: “Since June, the Obama campaign has been working with the Rural Iowans for Obama Council to talk about the President’s plans for keeping rural America and U.S. agriculture moving forward and the need to hold Mitt Romney accountable in rural communities across the state.”