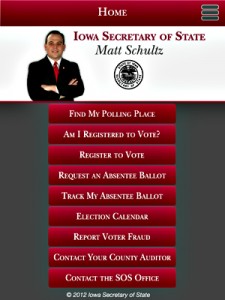 Wondering where your new polling site may be on Election Day? Iowa Secretary of State Matt Schultz says there’s now an “app” for that.

“We’ve been working on this for the last six to eight months,” Schultz says. “Now it’s available on iPad, iPhone and Android.”

“You can check right on your phone to see if your absentee ballot’s been received by your (county) auditor,” Schultz says.

App is short for “application” of a particular computer program. Download the Iow Secretary of State’s app, for free, in the Apple App Store or in the Google Play Market.

“It’s a comprehensive app that is really a first of its kind, I think, in the country,” Schultz says.

He hopes to add new features for future elections, allowing people to follow real-time Election Night results via their smart phone or tablet.

“More and more people are using tablets and smart phones. I mean, I don’t even use a computer much anymore. I use my tablet more than anything,” Schultz says. “I think a lot of people who use technology are going down this road and, obviously, those voters who don’t still have the general way of going to the auditor’s office and getting their absentee ballot request form and so forth, but this is a way in which we try and make it as easy and accessible as possible for voters here in Iowa.”

One of the apps lets Iowans report suspected voter fraud. Schultz, a Republican, reviewed Iowa DOT lists earlier this year and discovered almost 3400 people had registered to vote when they got their driver’s license or photo I.D., but were not eligible to vote. Schultz wants to check that list against a federal database, but the effort has been challenged in court. A lone Division of Criminal Investigation agent is combing through the list, however, and so far five people have been charged with voter fraud.