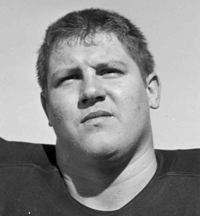 A former Iowa Hawkeye football player who went on to be a star in the NFL and on television has died.

Alex Karras was an Indiana native who played college football at the University of Iowa. Karras, a defensive tackle, was the runner-up in the voting for the 1957 Heisman Trophy. He played professional football for the Detroit Lions and retired in 1970 at the age of 35.

Karras was a co-host of “Monday Night Football” on ABC for three years and had success as an actor. In the 1974 movie, Blazing Saddles, Karras played Mongo — a character who punched out a horse in a memorable scene.  Karras played the sheriff in the 1982 movie “Porky’s”.

Karras also starred in the long-running TV series “Webster” — portraying a retired professional football player who adopted the child of a fellow player.  The woman who portrayed his wife on the show was married to Karras in real life.

Karras and his wife joined 69 other former NFL players in filing a lawsuit against the league earlier this year, arguing the NFL did not properly warn players of the risk of returning to the field after suffering a concussion.

According to a family statement, Karras died after “a heroic fight with kidney disease, heart disease, dementia and, for the last two years, stomach cancer.” He was 77 years old.

Photo courtesy of the University of Iowa