You are here: Home / Agriculture / Boswell and Latham debate in 3rd District race

The first of a series of debates between Congressman Leonard Boswell and Congressman Tom Latham took place last night in Creston.

The 90-minute exchange included topics ranging from the farm bill to health care and education to the deficit. Democrat Boswell noted one of the biggest problems looms.

Despite the economic difficulties, there are still things that need to be done, like passing a Farm Bill, as Republican Latham addresses. 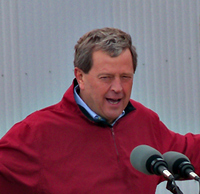 “We’ve got to have a farm bill I think that represents, number one savings, and farmers are willing to contribute to deficit reduction doing away with direct payments, revising the countersicyclical payments. If in fact there’s a safety net for them, basically with crop insurance, risk management tools,” Latham said.

Boswell agrees, the farm bill needs to be passed, and adds they should be in Washington doing it. He also sees the need for rural infrastructure, and suggests ways to pay for it.

At times the discussion was contentious:
Audio: Boswell and Latham  :20

And at times cooperative:
Audio: Latham and Boswell   :37

The two incumbents are facing off  to represent the Third District after one congressional district was eliminated following the 2010 Census. Latham is seeking his 10th term, Boswell his 9th.