You are here: Home / News / Grassley says State Department should be embarrassed over handling of embassy attack 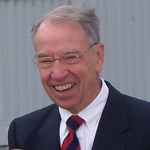 A hearing on Capitol Hill today will focus on diplomatic security at the American embassy in Libya where an attack this September 11th left the U.S. ambassador and three other Americans dead.

Federal officials now say the attack was planned for that date and was not related to an independent movie mocking Muslims.

Iowa Senator Chuck Grassley says it’s now clear the timing of the attack and protests over the movie’s release were coincidental.

Grassley says, “Now, with the State Department, which is part of the Obama administration, they’ve got to be embarrassed now that their own people are saying it had nothing ever to do with this film that the president for three weeks blamed for the murder over there of our ambassador.”

“And I say emphasis upon foreign policies because Biden’s supposed to be an expert in it,” Grassley says. “I want to see what he’s got to say about it, but I’ll bet you that our vice presidential nominee is going to hold his feet to the fire.”

Today’s hearing on the Libya attack is before the Republican-led House Oversight and Government Reform Committee.