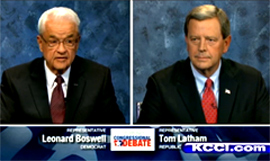 During an hour-long televised debate tonight, the two incumbent Iowa congressman who’re running against one another this fall argued about their campaign ads.

Republican Congressman Tom Latham has an ad that blasts Democratic Congressman Leonard Boswell for giving his staff half a million in bonuses and Latham repeated the charge this evening.

Boswell replied: “How disingenuous for you to say that when you yourself have done that.”

Boswell said the salaries Latham pays his congressional staff are about $6000 higher, on average, than the salaries for Boswell’s staff.

“You probably ought to tell me how sorry you are for doing that,” Boswell said.

Latham began: “Well, the fact of the matter is in the last 16 years — all the time he’s been in congress — he has paid his staff about a million and a half dollars more than what my staff has.”

Boswell interrupted: “That’s not true. Do a fact check on it.”

Latham replied: “Excuse me. You know, part of the problem we have in Washington is people won’t listen.”

Boswell defended an ad he’s running against Latham, charging Latham has personally benefited because a bank Latham invested in got federal bailout money. Latham used words like “false” and “misleading” to describe the ad, because Latham moved his bank investment into a “blind trust” and has no control over decisions made by the bank’s executives.

“This is really about being honest, about someone who tries to make up an issue and I would just, you know, ask Congressman Boswell: ‘When’s the last time you ran a positive ad?'”

Boswell replied: “You’ve been negative throughout your career and what you’ve done and so here’s a situation where it’s so disingenuous to use something and then preach against it. You think that Iowans don’t realize where your major investment is.”

Latham said: “You notice he didn’t answer the question about when’s the last time he ran a positive ad because he can’t remember.”

Tonight’s debate was co-sponsored by The Des Moines Register and KCCI, the CBS television affiliate in Des Moines. The two congressmen are scheduled to debate again Thursday night at seven o’clock on Iowa Public Television.