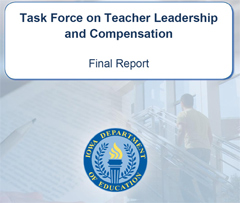 The state task force studying teacher pay today released its final recommendations for the state legislature as part of the effort to improve the state education system.

Department of Education director, Jason Glass, talked with reporters about the recommendations.

“The core tenets of the recommendations are around first raising the starting pay or base pay for educators,” Glass says.

“And the reason that that is so important is when we studied high-performing systems around the world, we saw clearly that there was an effort to raise the beginning pay for educators to a level competitive with other professional options.” The plan would raise the base pay of teachers from $28,000 to $35,000 over three years.

Glass says they also want to reward teachers who agree to teach in areas where there are shortages. “We know that we have shortage areas in math, science and in special education. And we have a hard time keeping teachers in our highest poverty areas,” Glass explains.

“The reasons for this are in math and science,these folks have other professional options, and in the case of special education or poverty areas — these are just tougher jobs. And the way you address a shortage is through a compensation increase.”

The proposal would give teachers who work in a high-poverty areas a $5,000 stipend on top of their salary. While the recommendations seek to get higher quality teachers into the system, Glass says they are also looking at hanging onto the quality teachers.

“One of the unfortunate things about teaching is that to grow professionally you have to leave teaching. We have a lot of people (who) make that choice to leave to either go into administration and move away from the classroom, or go into another field altogether and leave that classroom completely.” according to Glass.

“So we think the time has come to create a variety of professional options for our best educators.” The proposal would create career pathways that allow experienced teachers to take on more responsibility for mentoring younger teachers, while not leaving the classroom. There is also a recommendation that new teachers are given a “residency” year that helps them transition into teaching.

Glass says the proposals from this task force will need around 150-million extra dollars to be fully implemented. “The task force was clear to recommend that new dollars are necessary to pull this off, we can’t repurpose and take existing money that’s in the system and hope to accomplish the goal that we have in place. So we need an investment on scale with the solution that we have and the problem that we have,” Glass says.

“So we recommend that new dollars be appropriated, but we also looking at the existing dollars and can we strategically use them in some smarter ways than we have in the past.” He says the effectiveness and timing of the impact of the recommendations depends on how well they are funded and put into place.

“Our dangers here are that we underresource and that we implement poorly. And Iowa has a history of doing both of those things,” Glass says. “I think we need a solution on the scale of the problem and that solution has to be resourced to the level that it can be effective. So, I think we’ve got some variables in play to see how quickly we can see a result.”

The compensation task force is one of nine making recommendations on improving the state’s education system. The reports from those groups are due to the State Board of Education, the Governor’s Office and the Legislature on Monday.

Officials from the Department of Education and the Governor’s Office will hold a series of conversations with educators statewide to hear feedback and to build support for the recommendations.