You are here: Home / Health / Medicine / Veteran shares story in hopes of helping others deal with impact of war 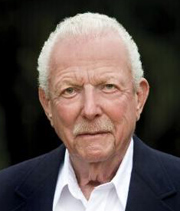 A study finds more veterans die by suicide every year than are killed annually in Iraq and Afghanistan.

A World War Two fighter pilot from southeast Iowa is telling his story today at an Iowa Veterans Summit in hopes more veterans can be saved and find peace.

Eighty-eight-year-old Jerry Yellin, of Fairfield, says he joined the service as an 18-year-old in February of 1942 and, in his words, “I learned how to kill.”

“I flew P-51s in combat over Japan,” Yellin says. “I flew with 16 guys who didn’t come back. One day, I had a pure purpose of living and the next day the war was over and I had no purpose of living. I came home and I was an empty soul. I had no ambition, no direction.”

Yellin says he “wandered for 30 years” and suffered from addiction until he learned Transcendental Meditation in 1975 and “got my life back.”

“It was just as easy as that,” Yellin says. “A very simple technique, not a philosophy, not a belief. Not what you think but how you think. It puts you into the zone of life, twice a day, 20 minutes a day.” Yellin is now the national co-chairman of Operation Warrior Wellness and he’s among the featured speakers at the summit in West Des Moines.

He says more veterans and their families are turning to meditation to ease the trauma of combat and to pave the way to a healthier life. “It’s a very inexpensive modality to remove stress,” Yellin says.

“It’s a 5,000-year-old traditional warrior’s way of learning to cope with stress.” Yellin says he suffered from “shell shock” for three decades after the end of World War Two, but it wasn’t something that was considered “manly” to discuss. Today, the condition is known as PTSD.

“Post-Traumatic Stress Disorder is a civilian term,” Yellin says. “I would like to see it changed to Post-Combat Stress Injury because it is a mental injury.” He says PTSD is now blamed for 18 veterans’ suicides daily. The Iowa Veterans Summit and luncheon begins at noon at the West Des Moines Marriott.

A release says it will present the research and clinical applications of Transcendental Meditation for reducing stress, PTSD, substance abuse and suicide, depression and enhancing resilience and performance.