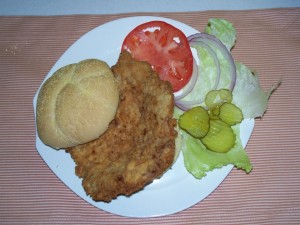 Iowa’s oldest restaurant is the maker of the state’s best breaded pork tenderloin. Breitbach’s Country Dining in Balltown in northeast Iowa has won the annual award from the Iowa Pork Producers Association. Breitbach’s first opened in 1852.

Iowa Pork Producers spokesperson Kelsey Sutter says this is the 10th year for the contest which involves six months of nominations and judging. “The contest starts in early spring and (the restaurants) need at least three nominations in order to even qualify for our judging process,” Sutter said.

Mike Breitbach is the fourth generation of Breitbach’s to own and run the establishment. In an average week, as many as 200 pork tenderloin sandwiches are sold, according to Breitbach.

The bar and restaurant bested four other finalists for the top prize of $500 and a plaque. Vinny’s BBQ in Dakota City received second place honors and will receive $250 and a plaque. The Dog House in Pella, Kelly’s Country Oven in Monticello and Antler’s Pub & Grill in Clare each received honorable mention plaques. The tenderloins are judged on taste, appearance and physical characteristics.

Breitbach’s has survived two fires since 2007. The fires on Christmas Eve 2007 and in mid-October 2008 both required the rebuilding of the restaurant.