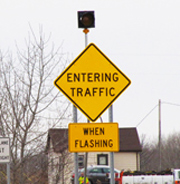 The Iowa Department of Transportation has installed a pair of traffic signals at one of the state’s more dangerous intersections located at the edge of the City of Springville in eastern Iowa.

Cathy Cutler, with the D.O.T., says crashes have occurred at the intersection as motorists on Springville Road pull out to cross the interstate at the wrong times. She hopes the flashing lights will improve safety.

“It activates as traffic passes by on 151, but it’s to signal to side road traffic when there’s a safe spot to come out and when there’s traffic coming towards them,” Cutler explained. Since 2003, there have been more than two dozen crashes, including two fatalities, at the intersection.

The new blinking lights are triggered by detectors installed in the pavement. They flash for about 12 seconds, which is the average time it takes for a vehicle to get across the intersection. “We’ve actually used it pretty successfully at other intersections where we’ve had trouble with side road traffic not picking good gaps to go across a four lane highway,” Cutler said.

Intersection Conflict Warning Systems are also in place in Anamosa and Dyersville. Amy Bartels of Monticello has been pushing hard for improved safety measures at the Springville location. Her husband, Roger, was killed in a crash at the intersection in February 2009. Bartels questions if the new signals will work.

“The blinking light will tell them that someone’s coming,” Bartels said. “But on a busy, busy day, I don’t think it will stop blinking and when do you go when there’s traffic coming? It maybe just confuses you more.” Bartels believes a better solution would be an interchange with on and off ramps.

D.O.T. officials agree and say the warning signals are temporary fixes until funding is secured to build a multi-million dollar interchange. The Intersection Conflict Warning System costs about $50,000 and is paid for mostly with federal dollars.