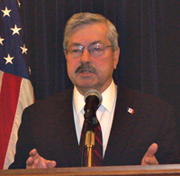 Republican Governor Terry Branstad plans to release a plan after the election that would cut Iowans’ individual income taxes and the income taxes charged to corporations.

He will also recommend cutting taxes for all types of property: commercial, industrial, residential and ag land.

“We look forward to some important opportunities to reduce the tax burden for Iowans and to improve our ability to bring new jobs and better jobs to our state that many Iowans desperately need,” Branstad says.

The State of Iowa collected $260 million more in taxes from Iowans than had been expected during the fiscal year than ended June 30th. A three member panel of experts predicts that over the next two years state tax revenues will be half billion dollars above previous estimates. Lieutenant Governor Kim Reynolds says it doesn’t mean the “flood gates will open” for more state spending.

“As you all know, we have an on-going drought in Iowa and while we weathered the first year better than expected, there is some justifiable concern about the impacts of the continuation of this weather pattern and how it may impact the farm economy and out state finances,” she says. “So while we are in a financial situation that is the envy of a lot of other states, we must remain cautious and vigilant.” 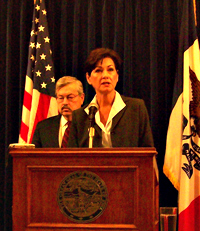 Reynolds says the uncertainty about looming cuts in the federal budget and the possibility of the national economy dipping into a second recession because of that are also reasons to contain state spending. Last week a task force recommended additional state spending to boost teacher salaries.

Branstad anticipates finding the extra money from a variety of sources. “We’re looking at actually re-purposing some of the existing dollars that would focus more on student achievement, but also we would look at adding some resources,” Branstad says.

“Remember, education is the area that gets the largest slice of the budget. I think it’s about 60 percent of the budget, overall, for education.”

The governor says his “comprehensive” plan to cut income taxes for individuals and corporations and cut property taxes for everyone will be revealed in late December or in early January.

“I’m committed to ensuring that taxpayers have a seat at the table,” Branstad says, “and that the decisions that are made about what to do with our surplus ensures that those who pay the bills also reap the benefits.”

Over the past two years Branstad has called for reducing commercial property taxes, but legislators from both parties could not agree on a plan — and nothing happened.