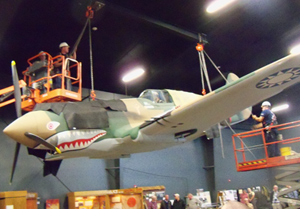 P-40 being installed in the Iowa Goldstar Military Museum.

The Iowa Goldstar Museum at Camp Dodge near Johnston added another major piece to its collection Wednesday.

A replica of a Curtis P-40B Tomahawk fighter plane was slowly raised to the ceiling of the museum to honor some of the first Iowans who fought in World War Two.

The plane became synonymous as a symbol of the “Flying Tigers” — a squadron of men who volunteered to fly out of Burma and defend China from the Japanese months before the U.S. joined the war in 1941.

This plane is painted in the colors of Marion native Bill Reed, who was one of four Iowans to join the squadron.

Reed’s nephews Edward and Porter were on hand as the plane was installed. Edward says Bill joined up in part for the adventure.
Audio: Radio Iowa’s Dar Danielson talks with Ed Reed. 9:30 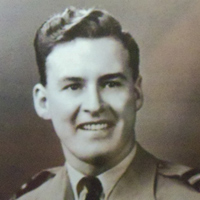 “I think a majority of the pilots as well as the ground crew were patriots who were looking for some excitement,” Reed says.

“Yet at the same time the pay was very good. They as pilots receive 600 dollars a month..in 1941 600 dollars was a pretty good chunk of change.”

He says the pilots also got $500 for each Japanese plane they shot down. Reed shot down 11 planes during his tour with the Tigers in his year-long tour.

“Bill came back to the United States, spent some time on a war bonds tour with many of the movie stars, and had quite a bit of exposure in Des Moines on that bound tour,” he explains.

His uncle returned to China with U.S. Army Air Corps in 1943. He lost his life after returning from a mission to find his airfield involved in a raid and under blackout. Reed and two other pilots circled the field until theY ran out of fuel and then bailed out. Reed hit is head as he leapt from the plane and died.

Edward Reed says Bill’s body was eventually returned to the U.S. and he was buried alongside his parents in Anamosa. He is pleased to see the plane representing his relative and others for their part in the war. “First of all I think it represents the courage, the loyalty, the dedication, the brave men who served our country during World War Two. And I think guys like this epitomize what I just mentioned about how much courage it took to do those kinds of things.”

Bill Reed’s uniform and other mementoes from his military service were handed down to Edward, and after talking with museum officials, he decided to give them to the museum for a display to go along with the P-40. He says the decision was easy.

“Why not donate these items to a museum that’s secure that knows what it is doing to give Iowans an opportunity to see it. They can’t see it in my basement,” Reed says. Museum curator Mike Vogt, says the project has taken about 3 years to come together.

“And my response was no, we want it to reflect the battle damage, the wear and tear that would have accumulated over the course of about eight months of combat. So when it showed up on the truck I was very pleased to see the exhaust stains and the gunsmoke streaks on the wings, and it looks like it has been flying and fighting for about eight months.”

Vogt says the plane itself cost about $31,000 to build and they have raised some of the money through donations. He says they are still taking donations for this exhibit and others at the museum.

He says you can send donations to: the Iowa Goldstar Military Museum, 7105 Northwest 70th Avenue, Camp Dodge 50131. You can also get the address on their webpage at: www.iowanationguard.com.