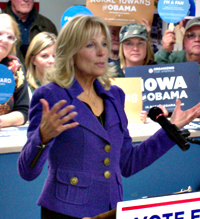 Jill Biden told the crowd in Mason City a victory for the Romney-Ryan ticket would mean a tilt in the U.S. Supreme Court.

“You have to think about the Supreme Court and what it’s going to mean if we have two super-conservative justices on that court and what that’s going to do to the fabric of American society for decades to come,” Mrs. Biden said.

“And we’ll have to live with that — and we’ve come so far, but we have to keep moving forward, not just on women’s issues — on issues that affect all of our families.”

“And the unemployment rate is as low as it was when President Obama took office,” she said.

Mrs. Biden’s visit is part of a push to appeal to women voters. On Thursday, four women who worked for Mitt Romney when he was governor of Massachusetts or running the Salt Lake City Olympics began touring the state of Iowa, too. Their “We Know Mitt” events were scheduled today in Ottumwa, Iowa City and Davenport to deliver personal testimonies about Romney’s leadership style.