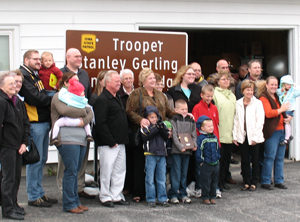 Family members of fallen Trooper Stanley Gerling attended a ceremony Thursday naming a bridge after him.

Signs honoring two Iowa State Troopers who died when their plane crashed into a field near Atlantic a little over 23 years ago, were unveiled at area bridges Thursday.

The bridges located along Highway Six in Cass County, were named for Troopers Lance Dietsch and Stanley Gerling.

Major Tim Leinen with the State Patrol spoke at the ceremony.

“Since the Iowa State Patrol’s inception in 1935, 10 troopers have paid the ultimate sacrifice in protecting the citizens of Iowa and all who travel through our state,” Leinnen said.

“These dedications will serve as a reminder of the gratitude that we have for our fallen, and the families that they have left behind.”

Six other troopers who lost their lives in the line of duty have already been recognized with bridge dedications.

The remaining two troopers will be honored over the next few weeks. Major Leinen said Dietsch and Gerling were killed in an airplane accident on June 30th, 1989, southwest of Atlantic while searching for a missing man.

“It was late in the afternoon when Troop-pilot Lance Dietsch, badge number 142, and Trooper Stanley Gerling, badge number 190, took off in the State Patrol aircraft. At approximately 5:45 p.m., the two troopers began working the area, guided by troopers on the ground. They were just about to call of the search when they spotted the elderly man on the ground in a soybean field,” Leinen explained.

The plane dropped down to around 200 feet to circle the area so troopers on the ground could find the man. Leinen says the plane then unexplainably crashed into the ground and both men died. Troopers Dietsch and Gerling were the first to die in an aircraft since the addition of the Patrol airwing in 1956.

He says they heard a lot of chatter on the radio and as he went back to the post, he met other troopers who had come away from a briefing, and they were very somber and told him what happened. “I can tell you to this day, it still affects me, I think about it every day. Every time I drive by Highway Six out here, I drive by the location and I still kind of get choked up about it,” Leinen said.

The bridges names after the men are located west and northeast of Lewis along Highway Six, as it traverses Indian Creek, and Turkey Creek.