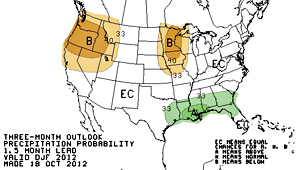 Forecasters are projecting Iowa could be in for another mild winter.

Meteorologist Kevin Skow, at the National Weather Service’s Climate Prediction Center, says the long-range forecast for December through February calls for a season ahead that echoes last winter.

Skow says, “It looks like we could see temperatures that are near-normal or slightly above-normal and precipitation also below-normal so after last year’s low snowfall, it looks like there might be a chance for a repeat of last year.”

While the forecast says rainfall and snowfall will likely be below-normal across the entire state during the upcoming winter months, but Skow says one part of Iowa could face an especially dry season.

“The better chance looks to be across northern Iowa but it’s a broad outlook so this could easily change over the next couple of months,” Skow says. The report says the only part of the country that’s expected to see below-normal temperatures this winter is Florida, while the Gulf Coast is the only area expected to see above-normal precipitation.

See the complete maps at: www.cpc.noaa.gov