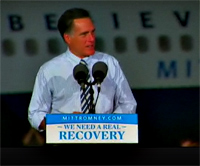 “You may have noticed that over the last few weeks we’ve had some debates. Did you notice that?” Romney asked and the crowd cheered. “And the good news is those debates have propelled our campaign forward in a major way.”

Romney accused President Obama of running a “smaller and smaller” campaign the closer we get to Election Day.

“As he focuses on, well, trying to save certain characters on Sesame Street and playing silly word games and making attacks that he knows aren’t true, because frankly attacking me is not an agenda for the future,” Romney said, and the crowd cheered.

Tonight’s event was held in an airplane hangar in Cedar Rapids and after Romney’s campaign plane landed, it taxied near the stage so he could quickly address the waiting crowd. Romney spoke for about 20 minutes, offering an indictment of the Obama Administration on everything from the nation’s debt to the stimulus.

“They have been unable to lay out an agenda for what they’re going to do to help America,” Romney said. “They have been unable to defend and describe what they are going to do to get our economy going again and that’s why with a president that’s out of ideas and out of excuses, why on November 6th you’ve got to make sure you put him out of office.”

Romney will be in Ames on Friday and campaign sources say he’ll be back to Iowa on Monday, for an event in Davenport where President Obama campaigned this morning. The amount of candidate time spent in Iowa in the closing days of the 2012 campaign is directly related to the polls which show Iowa is a toss-up state.

“I’m optimistic, not just about winning — we are going to win, by the way,” Romney said in Cedar Rapids tonight and the crowd erupted with cheers, then started chanting his name.

Erin Seidler, a spokesman for President Obama’s Iowa campaign, issued a written statement tonight. “Mitt Romney spent a lot of time today talking about what a different path he’d take us down if he were elected. And he’s right,” Seidler said. “…Romney would take us back to the foreign policy of the 1980’s, the social policy of the 1950’s, and the economic policy of the 1920’s.”