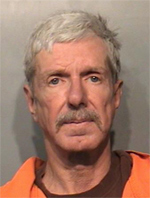 Police in Des Moines have labeled the death of a man found under a downtown bridge a homicide.

Sergeant Chris Scott says investigators have been working the case since the body was discovered by a passerby between a walking path and the Des Moines River around 4 p.m. Wednesday.

The victim is identified as 56-year-old Stanley Golinsky of Des Moines. An autopsy is set to determine the cause of death. Scott said investigators aren’t speculating how Golinsky died, although it’s clear there’s foul play involved.

“The injuries he had weren’t obvious, which is why it took a period of time to determine how these could have possibly happened,” Scott said.

“During that investigation, it became obvious that these (injuries) had to be (caused) by another person.” Detectives are treating the area under the railroad bridge near SW 1st and Vine St. as a crime scene.

Scott said investigators believe Golinsky was killed at the scene, rather than someplace else and then dumped under the bridge. Police have yet to identify any suspects. “Our victim was in and out of some homeless shelters, so (detectives) are trying to identify associates in those places and continue with any leads they might have,” Scott said.