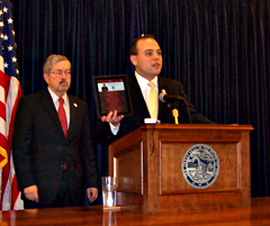 Iowa’s governor and the state official who’s in charge of running elections both suggest the presidential race in Iowa will come down to a few thousand votes.

“I believe this will be yet another very close election in Iowa,” Branstad said this morning during his weekly news conference.

“We are just one of a handful of states that will decide who will be the next president of the United States.”

“It is going to be an exciting race,” said Schultz, who Branstad invited to speak at today’s news conference. “It’s going to be close, we believe and you can see that because both campaigns are spending a lot of time here at the end.”

Mitt Romney is campaigning in Davenport today. Romney and his wife will return for another rally in Des Moines tomorrow. First Lady Michelle Obama is campaigning in Iowa City and Sioux City this afternoon. Vice President Biden is due to campaign here later in the week.

If there are just a few votes separating Barack Obama and Mitt Romney on election night, there is no law that requires an automatic, statewide recount.

“This will be something that will go county-by-county if it comes to that,” Schultz said. “But we’re hopeful that it won’t come to that, but elections — they can be close and it may can happen where some of our state races are close, and so one of the candidates will be able to request a recount, if necessary.”

According to Schultz, recounts are rare in Iowa. Governor Branstad says the presidential campaigns are prepared for one, if it’s necessary.

“Both candidates have an army of lawyers that are here — I can guarantee you that,” Branstad said. “So there’s going to be a lot of people who are watching and watching the integrity of this.”

If there is a recount in Iowa, Secretary of State Schultz said there’s a paper record of every ballot inserted in the “optical scanner” machines used to collect Iowa votes on Election Day.

“There won’t be any hanging chads in Iowa,” Schultz said, with a laugh. “…We have a paper ballot and it’s just like a multiple choice test you take at school and if those ballots are put in the machine. If there are issues, they’re able to be taken care of because we have a paper ballot.”

There is an investigation underway in Muscatine and Floyd Counties after allegations of absentee ballot abuses.

“I can tell you we take all complaints very seriously and all allegations very seriously,” Schultz said. “That’s why I went to the Department of Public Safety earlier this year to request a DCI agent. This is a great example of why we need a DCI agent with the Secretary of State’s office.”

But Schultz said the investigation is in the hands of law enforcement now and he has no further comment. A Democrat in Muscatine says a campaign worker improperly had his mother sign an absentee ballot request form for him and similar allegations against paid Democratic Party workers are being investigated in Floyd County. Governor Branstad says the message is that Iowa election officials are “vigilant” and those who try to cheat will be investigated.

“It is very serious when somebody forges somebody else’s name or somebody inappropriately get a ballot on behalf of somebody that didn’t request it,” Branstad said. “…It’s a felony, so it’s a serious criminal violation.”

According to Branstad, those accused of the inappropriate activity have retained lawyers and it’s unlikely the cases will be resolved before Election Day.  About 470,000 people have already voted in Iowa.

“Compared to 2008, there were 545,000 ballots cast early or through absentee, and so the trends are moving where we should reach or surpass that by the time November 5 comes around,” Schultz said.

About 45 percent of those who’ve already voted are registered Democrats; 32 percent are Republicans and the remaining 23 percent are independent or “no party” voters.

AUDIO of Branstad’s weekly news conference, with Schultz as a guest this week.